What if America Kept its Promises? (some thoughts after watching the DNC)

It was nearly 10 pm PDT on Monday when I pulled up Michelle Obama’s speech on my computer. I was sad to have missed it in real time, but my toddler was finally asleep, and now the house was quiet enough that I could watch. I filled two bowls with ice cream and handed one to Smoke, who was reading on the couch. I pressed play and waited for the video to load.

I didn’t expect that Smoke would watch too. I thought he’d return to his book or complain that the sound was distracting him or ask me to put on a funny cats video instead. I was preparing to fight for my Michelle Obama moment, but it turned out I didn’t have to. Smoke sat there riveted, his spoonful of ice cream poised in front of his open mouth as he watched our First Lady in her blue dress. He listened as she described loading her daughters into a black SUV with the secret service on their first day of school. As she went on to say “I wake up every morning in a house that was built by slaves,” and described the feeling of watching her daughters run across the White House lawn, Smoke looked over at me and seemed to understand why I was pressing tears away from the corners of my eyes.

Smoke was born in October 2008, one month before Obama would win the presidential election. This means that President Obama is the only president that Smoke has known. “That’s our president,” I say whenever we hear him speak on the radio. I say it with a certain pride not because he’s never disappointed me, but because I admire him. I appreciate that he models grace under pressure, that he manages to articulate truth in times of grief, and that he is not too self-important to display a sense of humor. These are qualities I want my children to have too, and they are qualities I wish we could take for granted in our world leaders.

Last week, as my mother was visiting, Smoke came across a set of American flag stickers he’d been giving at the grocery store for Independence Day. His eyes lit up when he saw them. “I’m going to make you a picture for your office!” he said and ran into the kitchen. Twenty minutes later he returned brandishing this: 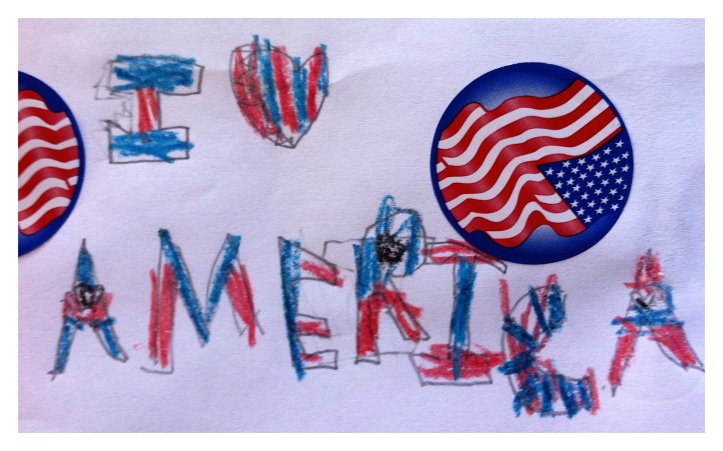 “Wow!” I said, and then made the mistake of making eye contact with my mom. We silently laughed until tears gathered in the corners or our eyes. We laughed because of the utter innocence of it, because apparently Smoke hasn’t caught on to my feelings about America, which have always been and always will be fraught.

The America my son has seen is different from the one I see. To him, so far, America is just his school and his friends and his family, and a president his mom admires, though she occasionally shouts in frustration at the news. To him, America is a cartoon of Uncle Sam, the promise of liberty and justice for all, and fireworks on the Fourth of July. To him, Donald Trump is an unkind man who surely won’t win the election because no one would vote for a bully.

I want to have the America that my son thinks we have.

On Thursday night my sons and partner arrived home just as I was watching Hillary Clinton give her speech in real time. I hadn’t expected to cry, but then she came out in her white pantsuit and stood there, alone, on a podium that floated above a vast sea of bodies. Smoke took his place next to me on the couch. When HRC declared “I believe in science,” Smoke whooped along with the audience and for a moment I wondered if understood the layers of meaning implicit in that statement. Then I remembered he just really likes science. My own whoops and hollers were probably every bit as mysterious to him.

I keep coming back to what Michelle Obama called “the story of this country”, the story of progress that has allowed Barack Obama to become our first African American president and Hillary Clinton to become our first female major party nominee. My newfound right to marry is also a part of that story. But somehow, I keep getting stuck trying to convince myself that our progress towards equity is real and not an illusion. There’s a small but persistent voice in my head going: Really? Are we truly evolving towards justice? Or are we about to take an irrevocable step backwards?

This November will begin to answer those questions for me. I hope that Smoke can continue to love America. I hope that I can love it too.