The First Days of Kindergarten: Like an Overturned Bathtub

Yesterday, the season changed to fall. We’ve had a long, dry summer, but suddenly the rain clouds have rolled in, the wind has picked up, and the sunlight—when it breaks through—is that pale yellow light that whispers “almost gone.” Last night, as I began the process of bedtimes, cold air blew through the open window. I closed it, and dug out the comforter that we had retired from the bed for July and August.

Our house is in disarray. On Monday, Smoke, Stump, and I returned from the east coast, and I still haven’t unpacked. We were gone for nearly two weeks, and Kellie used the time to remodel the bathroom; the floor underneath it had been rotting for years. But she hasn’t finished. We have a toilet, but no sink, no washer dryer, and the bathtub is upside down in our living room.

I’m beginning to realize that chaos is a choice we keep on making rather than something that is constantly happening to us.

For instance: about a month ago, Smoke got a packet from his kindergarten teacher in the mail. It contained homework. We looked at the various pages at the kitchen table. Within an hour, several of the pages were spotted with pizza grease. I worry about what this says about us.

So last night, the night before the first day of kindergarten, the night of the cold wind and fading light, I brought the kids home freshly bathed. I told Smoke that he could choose a show to watch while I put Stump to sleep. He chose Caillou.

Caillou. The bald toddler who interested Smoke for about a month when he was three and hasn’t interested him since. Caillou was quickly replaced by Dinosaur Train, and then Ninjago and Spider-Man and Chima, and there was no looking back. Until now. On the night before kindergarten, my son chooses Caillou without any trace of irony. He asked me to read him the episodes, and he remembered each one like he had watched them only last week, and finally he settled on “Caillou Tells the Truth.”

After Caillou and books he fell asleep within minutes, without protest, holding his stuffed fox. This is not how our days have been. 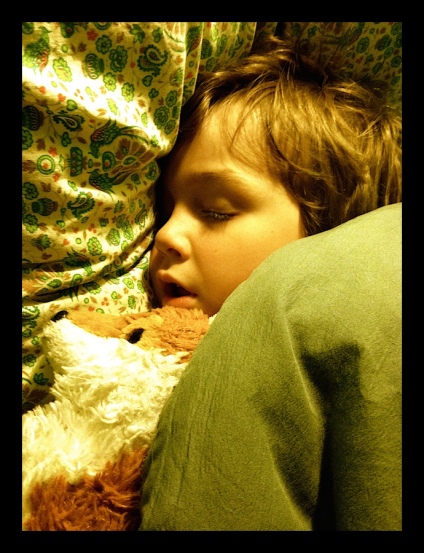 Our days have been full of contention. At least once every day, Smoke decides that any given limit I’ve set is proof that I am out to get him. A look crosses his face and he begins to taunt me. He’s silly at first, calling me a poop-butt or a stink-bunny, but if I react he comes after me. He’ll belt me in the gut, or kick me from behind. This is all very alarming, and the two things that keep me from running to the nearest child therapist are a) I seem to be the only recipient of these rages and b) in some weird way, he seems to have control over them. He has yet to actually hurt me, and it always seems like there’s a calmer, kinder Smoke only one layer underneath looking on in wonder.

Still, I’ve been struggling to explain his behavior to myself in any kind of satisfying way. I think perhaps that summer has bored him, or that he’s trying on his independence, or that he’s jealous of the constant attention his little brother gets, or that he’s anxious about the big changes coming his way.

This morning Smoke rose early, and I got up to find him snuggled into Kellie’s arms for the minutes before she had to leave for work.

Our morning began well, until I asked him to get dressed five times over the course of twenty minutes. He was jumping from the bathtub to the couch and could not be interrupted. His brother, for once, was eating quietly in his high chair. “I don’t know what to do with you,” I told him. “We need to go, and you’re not getting dressed.”

“You’re so mean!” he said. The look flashed across his face.

He stood on top of the bathtub and furrowed his brow. “I woke up excited this morning, and then you came along and hurt my feelings.”

I sat down on the couch and pulled him into me. I know that feeling so well—that feeling of bright expectation, interrupted by conflict. I knew also that I wasn’t mean, but was in that moment the container for his ambivalence, the voice that nagged about all the things that needed to be done. “I’m so sorry,” I told him. “I want you to be excited. Let’s both work at being nice, okay?”

Twenty minutes later he sat on the rug in his classroom while parents and siblings gathered at the edges. The teacher read a story called The Kissing Hand about a raccoon who was nervous to begin school. I held Smoke’s little brother Stump in my arms, praying he would not leap or cry out, or demand to run amok across the room. In the book, the raccoon’s mother kisses the inside of her child’s paw, and tells him he can use that kiss any time he needs some love from home. Her child returns the favor.

Once the book had ended, it was time to say goodbye and so the parents found their children one last time. Smoke looked around and had trouble spotting his brother and me. I could see him crumble just a bit. I called to him. Everyone around us was kissing hands. “Goodbye!” he offered brightly after spotting us.

“No wait,” I said. I offered the inside of Smoke’s hand to Stump, who eagerly kissed his brother, not once, but over and over. We did that all around, kissing hands until the moment passed and parents filed out. We closed the door behind us so it looked like we were gone, but many of us stole an extra moment watching through the classroom window. When I saw that the other parents were crying, a quiet sob shuddered through me. How long had it been lying in wait? All morning? All month? Since the day he was born?

That sob completed my rite of passage. Leaving Smoke behind us, I walked Stump home in the stroller, sniffling, now the mother of a school-aged child.